– Unfortunately, art does not change society

– Unfortunately, art does not change society

Edgey Pires and Delila Paz make up the members of The Last Internationale from New York. A short talk reveals their engagement and what they think our responsibilities as humans are. See them live at Ravnedalen Live 2021, read the interview here:

– Ufortunately, art does not change society

You are known for your socially-conscious lyrics already and now you have recorded and released a song in tribute to George Floyd. Tell us a bit about «Master»..

– «Master» is a protest song against police brutality. We wrote it a few days after the murder of George Floyd. We recorded a semi-live version of it and released a video of it right away to help raise funds for the Minnesota Freedom Fund.

Social consciousness seems to make up the very base of The Last Internationale. What led you to start a band with this kind of focus?

– We’ve had that focus long before starting the band. Humans have a responsibility to speak up against injustice, whether they are in a band or not. But since we are musicians, it would be dishonest to mute that part of ourselves for the sake of being liked or gaining more fans. And just because so many rock musicians have sold out doesn’t mean we have to join the bewildered herd. We wouldn’t feel good about ourselves if we pretended not to care about the oppression that permeates every aspect of our lives.

«The Internationale» has been a standard of the socialist movement since the late nineteenth century. Your band name, The Last Internationale, I want to say there´s hope and ambition involved here. Am I way off? Or is it maybe a reference to the first line C’est la lutte finale / This is the final struggle?

– You’re not off. There is hope, but we wanted to add urgency to the struggle. With the advent of nuclear bombs and global warming, this might be the last chance we have to make it right. As Noam Chomsky points out, we have to abandon our narcissistic individualism and embrace more of our cooperative nature. The current protests could be a cultural turning point, but it is too soon to tell.

The article continues below the picture..

I´ve talked to artists that feel a strong need to produce and/or communicate in their art form, but also feel like words/paint/lyrics/melodies aren´t enough. Is there a kind of helplessness in the arts now, in regards to BLM, or do you think artists can make a real tangible difference?

– Unfortunately, art does not change society. I would like to believe so, but that would be wishful thinking. It is the disruption of institutions that is the real agent of change. The invigorated protests and so-called «riots» are the only tactics that worked in bringing about any tangible reform in the US in a long time. Songs have never had that kind of impact. Music can awaken some people and motivate you to take it to the streets, but ultimately the musicians need to get out and protest.

It is good that you mentioned how artists want to do more than write some songs about BLM. But where are the songs in rock? You have to do SOMETHING in order to do MORE. The newer mainstream rock artists have overwhelmingly been silent in the face of racial oppression. Most of the rock protest songs are from the past. Some have been speaking up, of course, but sadly rock is no longer an artistic medium for the rebellious. Rap and pop has taken its place. One of our fans has even gone as far as mockingly saying that Justin Beiber is more «woke» than rock. We can’t argue with that. Certainly rock suffers from an ideological crisis and a deafening silence that is symptomatic of white privilege.

Forget all the mainstream rock acts that haven’t already said something of substance or taken a real stand against racism. It’s too late for mere lip service or recycled slogans like «flower power» that has no relevance to today. None of that is genuine and it’s contrived by labels. There are plenty of small bands that are real. If we learned to organize, we could have the power to change this genre for the better.

If someone says to you All lives matter. How would you answer to get the message through?

– I wouldn’t answer them. That person is a proud racist and there is no point in engaging in conversation with them.

The article continues below the picture..

Structural racism has been a known problem in the US for a long time, and it seems that the killing of George Floyd launched a nationwide, even worldwide protest. Do you think this will create lasting change on a global scale?

– We are already seeing some change. For example, Minneapolis has already agreed to abolish their police department. In states across the country police departments are being defunded and the money will be allocated to education and social programs. This could have a reverberating effect around the world.

When the dust settles – what do you see happening next? Historically, humans are quick to forget. Moving forward – how do we keep this top of mind and make sure the movement stays powerful?

– We can’t say what will happen next. We have to focus our energy on organizing and protesting. Communities of color don’t forget. The problem is that they are the ones that are being forgotten by white society and the only way for them to be seen or heard is by taking direct action.

If I say TRUMP, you say…

Article continues below the picture….

To tell you the truth, stories about Covid19 are not exactly what I want to write, but I wanted to ask you – you had a pretty extensive tour planned this year. How does this situation affect you? What have you done to stay on top of things?

– We were scheduled to play over 20 festivals this summer. This has definitely impacted us financially. We have to think of other ways of making an income, like online concerts, releasing more music, adding new stuff to our merch store, etc. We are even thinking about going on Patreon since we are accumulating a ton of footage of our writing process.

You are an extremely active band, and it seems you are constantly either working on your music or doing concerts somewhere in the world. I’m betting you are looking forward to getting back on the road? Or has it been ok to sit down for a bit?

– We can’t wait to get back on the road. We’ve been working on new music ever since our tour got canceled due to the coronavirus. We should be recording a new album soon.

You´ll also be back in Norway next year and you are already confirmed to play at Ravnedalen Live in july. We are very excited about that! You are known to be an explosive live band, and having seen you in concert a few times myself I can definitely confirm that it is absolutely true. What will you be spending your time on until venues open up and you start playing gigs again?

– Thanks. We will continue to write new music and then, at some point, will go into the studio to begin recording a new record.

That is great news!

I have one more question for you, and a little inspiration challenge at the end. At the moment, I’m trying out something new, where I ask people to give themselves an interview, instead of me asking about all kinds of crap they might not even care about. So – If you were to ask yourself one question – what would it be?

– Not sure what the question would be, but we would ask ourselves a question that we wouldn’t know how to answer. We like being challenged.

Patti Smith’s Horses.
Patti was on a mission to make rock subversive at a time when it was becoming corporatized and corny. That’s where we are today and we are on the same mission.

Rage Against the Machine – all albums.
This one is pretty self-explanatory. We never heard anything like it before (journ. selected pic)

Sam Cooke’s Live at the Harlem Square.
This record has the best version of «Bring It On Home to Me.» This is Sam at his finest and one of the best albums we’ve ever heard. We play it constantly on tour. It always picks us up when we’re tired or feeling down. 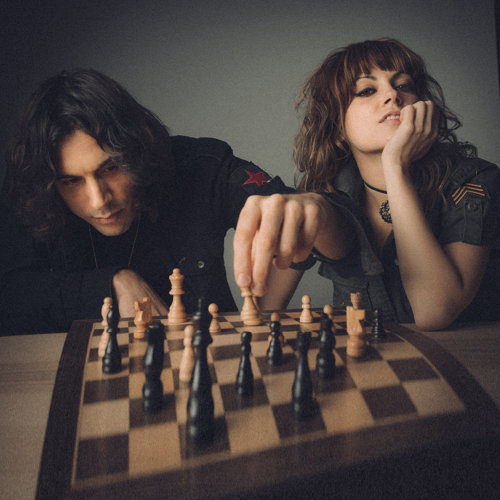